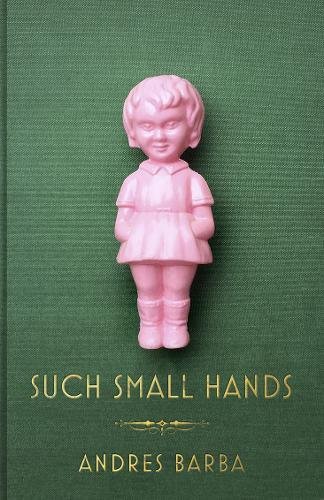 Edmund White states in his Afterword that in this slim novella, Such Small Hands, Spanish writer Andres Barba “has returned us to the nightmare of childhood”.

Maybe it’s a Spanish thing. Of the many pop culture associations that sprang to my mind reading Such Small Hands, perhaps the closest is the 2006 Spanish film Pan’s Labyrinth (El laberinto del fauno), written and directed by Guillermo Del Toro. Pan’s Labyrinth is as dark a nightmare of childhood as I could ever accommodate.

Truth to tell, I find myself pushing away this small book because it’s just too dark.

I find myself dismissing it as a kind of party trick, a Halloween party trick. Very clever, very skilled. Very scary. Nothing to do with me or mine.

If I were an agent, pitching this tale, I’d pitch it as an all-girl Lord of the Flies set in an orphanage, meets Courtney Love singing Doll Parts. Meets Euripides’ The Bacchae.

Plus Ziggy Stardust and the Spiders from Mars.

With that scene from Barbarella with the vicious dolls. And Anita Pallenberg as the Grand Tyrant.

I’m not an agent, and some things get under my skin.

This tale is apparently based on a real-life incident in an orphanage in Brazil in about 1960. The presenting circumstance is that a child is orphaned: a child loses her parents. With her parents, she loses her protections in life. Much as the child did in Pan’s Labyrinth.