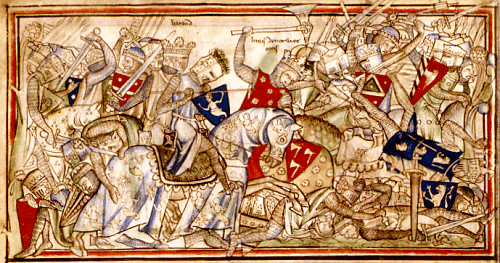 Harald Hardrada’s true-life story is epic. Parts of it are recorded in a range of historical sources, including Snorri Sturluson’s Saga of Harald Hardrada (“Hard Ruler”), and all of it is extraordinary, larger than life, as was the man, famously described as “taller than most men” and therefore requiring a larger burial plot.

It’s an epic that cries out to be told and re-told.

I first met Harald Hardrada through another historical fiction trilogy, about a different – and fictional – Viking named Harald Sigurdson (sic): Henry Treece’s Viking Dawn, The Road to Miklagard, Viking Sunset. Reading Treece’s Viking Trilogy as a child in the 60s led me to Treece’s fictions Last of the Vikings and Swords from the North, both about Hardrada.

More recently I’ve re-traced Viking voyages from the frozen north through Rus through Pecheneg lands to Byzantium with Robert Low’s Orm and his men, in the Oathsworn series, starting with The Whale Road. Orm’s journey is a descent into darkness: savage, nihilistic.

Justin Hill charts similar geographical territory in his life of Harald Sigurdsson, King of Norway – Harald Hardrada, Last of the Vikings – but Hill’s novel has a different project. Framed as if recounted by a Saxon archbishop, as told to him by Harald, it’s ambitious and literary and seeks to situate Harald historically as a ruler with wide experience of the known world’s great powers, a Christian king who recognizes the need for the peoples of the North to transition from raiding and subsistence agrarian communities to trading-based economies with centralized institutions and a literate administrative class.

Hill suggests that had Harald (rather than William) succeeded in conquering England in 1066, England might have remained part of a Scandinavian sphere post-Knut, with its Saxon and Dane traditions respected and evolving to meet the needs of a new epoch. Instead, the Normans led by William defeated Harold Godwinsson at Hastings, the Harrowing devastated English lands, Saxon elites were destroyed or absorbed through marriages, Norman institutions were imposed, and Anglo-Norman England became a domain of mainland western Europe, its history for the next 500 years (or more) inextricably and bloodily entwined with that of the French kingdoms.

Ealdred the Archbishop writes: “For a king more famous for his prowess as a warrior, I expected a bluff and ill-educated man, but I was surprised. He talked expansively of his life, and he was not the brute that we had feared. He was learned, and wise, and had not wasted his time among the Greeks.”

Indeedy. As ‘Araltes’ the Varanger (a bodyguard to Emperor Michael IV), Harald played a key role in the bloody politics of C11th Byzantium, travelled in the Emperor’s service to Jerusalem, and fought in Sicily and the Italian peninsula. He amassed a fortune, enabling him to return in style to Norway, which he’d left as a 15 year old fugitive from the Battle of Stiklestad, where his half-brother King Olaf (St Olav) was killed.

It’s an astonishing life narrative that seems to argue that which doesn’t kill makes stronger. Or that fortune favours the bold. Or simply that being smart and strong and brave and lucky is a winning combination.

I particularly like that Hill allows his women characters dignity. There are serving women, nursemaids, empresses, queens, sex partners, wives and mothers – but he’s made the effort to acknowledge each, to create characters, and not to exploit them pornographically. Yes, women in this period were often sexually exploited, sexually abused; but women also had respected roles, sometimes important roles, and as individuals were loved and admired, as sex partners, wives, mothers, daughters and sisters have been often, throughout the ages. Reading other Viking novels we might sometimes forget this.

Read Viking Fire. Read Shieldwall. Read the third novel in the trilogy, when it comes out.

On a personal note, as I write this, and as I read this novel, I am nursing my father in his last days. Justin Hill’s novel plucked me out of my small world, and took me somewhere else. Thank you for that.