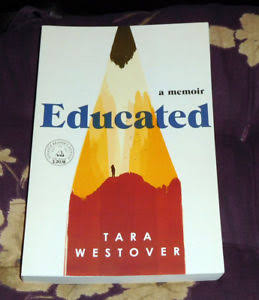 I love this book, and I don’t want to put it down, literally or figuratively.

But it must be said upfront:-

A story of self-invention, of pulling oneself up by one’s boot-straps, of education as deliverance, of the individual as hero.

A story about a back-country girl whose remorseless pluck earns her our admiration – Jennifer Lawrence as Katniss Everdeen (The Hunger Games), as Ree Dolly (Winter’s Bone), as Joy in the eponymous movie Joy. It’s The Unsinkable Molly Brown.

A story currently in the Zeitgeist – three books I’ve blogged about recently, Idaho by Emily Ruskovich, History of Wolves by Emily Fridlund, and, most of all, My Absolute Darling by Gabriel Tallent, are all kissin’ cousins to this narrative.

It’s contemporary feminism and #MeToo entwined with the narratives of Joseph Smith, Brigham Young and the Church of the Latter Day Saints, the Mormons.

The narrative as retold by Tara Westover is straightforward:

A girl (a warrior child, an Arya Stark) is the youngest of seven children (omg! A Snow White nod!), born to a young Mormon couple who live on a small-holding on a mountainside in Idaho. The father, who in her book she calls Gene (most of the family are assigned pseudonyms), was an idealistic and somewhat odd young man when he married, who has become seriously odd across the years. He believes fervently that the End Days are imminent.

He’s not alone in this in his neck of the woods. The notorious Ruby Ridge shootings in 1992 took place on another mountainside in that Idaho neighborhood, with FBI agents wounding another mountain father, killing his son, his wife and his baby (held in its mother’s arms). Ruby Ridge was a formative experience for Tara Westover and her siblings, and a turning point in their parents’ radical rejection of mainstream values.

Tara’s father’s mission is to stockpile food, weapons and all essentials to ensure his family are sheltered and protected when the world as we know it collapses, soon. He believes government is the agent of doom. He believes his family, as best possible, must be kept ‘off the grid’, under the radar of government oversight.

And the odds are ever in favour of their premature deaths.

The father earns a living doing freelance construction work and picking scrap metal from the junk heap that threatens to smother his mountain. He has the older children work on his construction jobs and the younger children work alongside him in the junk heap. He does not believe in OH&S. He does not believe in what most of us might consider common-sense safety precautions. He tells his children there are angels watching over them so they won’t be killed. When they suffer serious injuries, he says see? Angels watch over you. Otherwise you’d have been dead.

When they suffer serious injuries, as they do, with terrifying frequency, the father refuses all medical care. He does not believe in conventional medicine, or doctors, or hospitals. He insists his wife trains with an unqualified rural midwife then, despite the wife’s aversion to midwifery, he insists she become the local midwife practitioner. After she suffers a serious head injury and her ability to monitor births is impaired, he insists she develop her herbal remedies practice. This has the unexpected side effect of founding a commercially successfully botanicals empire, marketed largely on the back of claims that the father’s life was saved solely by herbals after he turned himself into a human torch, in an accidental involving a blow-torch and a petrol tank.

By the time her parents become wealthy local employers and gurus of natural cures, Tara is long gone.

After failed attempts to convince her father to permit her to attend school, eventually as a teen she goes to great lengths to secure a “late issue” birth certificate – complicated by the fact various records show various birthdates – and, with the help of her brother Tyler, is able to gain entry to Brigham Young University, the Mormon college, claiming she’s been home schooled.

Tara’s “home schooling” was a nonsense. She swots like a teenager obsessed (as she is) to pass the entrance exam for college. She teaches herself algebra and calculus from scratch, with some help from Tyler. When she arrives at college, she has never heard of the genre “short story”. Her teachers remark that she writes well but in a stilted, wordy style; a consequence of learning from the Bible and the writings of the Mormon patriarchs.

Worse, in her early lectures she is handicapped by not recognizing Europe is a continent, not a nation, and humiliated when she puts her hand up to ask what this word in the photo captions means – “Holocaust”?

“Very funny,” snaps backs her lecturer, without looking up.

Predictably, Tara fails her first exams. But, she persists. By working through the nights, by mid-year she achieves the perfect score she needs to win a scholarship to fund her studies.

Tara is not doing so well socially, either. She hasn’t been taught basic hygiene. She is ashamed to speak about her home and her family. She seeks counselling, and finds an ally in the local Mormon bishop. He attempts to direct her to government grants, but her father’s teachings are embedded: the government is Satan; financial assistance is Satan’s lure. The bishop attempts to loan her money from the church. Tara is adamant: that money is intended for other purposes. In exasperation, the bishop attempts to lend her money from his own pocket.

Tara does accept a fellowship to join a select group of students from Brigham Young to spend several months at Cambridge University in England. There, she experiences a whole new order of social inadequacy. (My grandfather was one of the first working-class scholarship boys to Cambridge. I know enough about his experiences to wince for Tara Westover.) But, once more, she impresses her academic supervisers, one of whom becomes a valuable mentor (which does not IMHO excuse his patronising remark about stepping straight into George Bernard Shaw’s play Pygmalion).

Subsequently this superviser champions her application as a Cambridge/Harvard PhD student.

Tara, whose family keep insisting she should be with them, should live like them, should work alongside them, chooses to do her PhD on family obligation, as examined in the doctrines of four influential American nineteenth-century social and/or intellectual movements, including Mormonism. What would I not give to read that thesis!

Throughout her college career, Westover constantly has to push back against her parents attempting to bring her back home. When they visit her, it’s to convince her she’s suffering demonic possession and only they can cure her. When she does visit them, she is redeployed back in that lethal junk yard, which keeps spreading.

Worse, when Tara revisits home, she comes into conflict with her older brother Shawn (a pseudonym), the black sheep of the family turned prodigal son, who at an earlier time in their relationship was her protector and special friend, but who turned to violent abuse of Tara once Tara reached puberty.

Tara is not alone is suffering abuse from Shawn. His girlfriends, then his young wife, are also abused. But the young wife excuses her husband’s behavior on the grounds Shawn is special in the eyes of God, and therefore subjected to greater temptation than regular folks, and Shawn is his father’s right hand man in the construction business, and has his father’s unequivocal support, so the family collude in silence about Shawn’s violent outbursts.

Westover writes that her rupture from the family circle was not brought about by her insistence on education (although her father does attempt to exorcise her while she’s at Harvard), but by her speaking out about Shawn’s abuse.

Despite what seemed to Tara some initial qualified support from her mother, and a false feint from the sister she calls Audrey, Tara remains estranged from all her immediate family except the two elder brothers who themselves achieved tertiary qualifications – not coincidentally, the only two family members who are not financially dependent on the parent family business. A third older brother is apparently sympathetic but is employed as the business manager and is not in contact with her.

For Tara Westover, the costs of self-actualisation have been steep.

When Westover was first at Cambridge, she identified her special interest area as historiography – the study of how histories come to be recorded, how primary materials are translated through the preconceptions and biases of those who interpret them for contemporary readers. This understanding is built into her memoir project. Westover writes very carefully, sometimes as if for a legal disposition. Unsurprisingly, her publishers had her manuscript exhaustively fact-checked.

Westover showed drafts of the manuscript to her brothers Tyler and Richard, and to extended family members such as aunts and uncles, and invited their input ahead of publication. In parts of the published text she acknowledges directly how others reported or recalled specific incidents. At the back of the book, there is a kind of appendix, where she lists incidents where others’ recall differs from her own, and where she has not been able to accommodate the differences in perception in the body of her text. This is the professional historian at work.

The final sentence of that appendix is especially poignant.

There’s a school of thought, based on neuroscience, that argues memory is essentially fiction, that the memories we choose to retain and to recall construct a selective history, and are highly amorphous, malleable. Westover discusses the nature of memory but more particularly she addresses the mechanisms of what feminists call ‘gaslighting’ – trying to convince people that their apprehension of reality, their own perceptions, are mistaken. Gaslighting is a technique of manipulation.

Tara struggled with counter-narratives – that is, people saying she misrecollected, or that she lied maliciously. She fought hard to have confidence in her account of her own history. The price of being accepted back into the bosom of the family she loves would be to admit she was wrong and to repent.

Tara Westover states at the start of her book that she is not attacking Mormonism. She says, in effect, her parents are crazy not because they are Mormon but are instead Mormons who just happen to be crazy.

I was reminded, reading Westover’s account, of Martha Beck’s memoir Leaving The Saints: How I lost the Mormons and Found My Faith (2006), which tells of Beck’s belief that she had been abused as a child in quasi-religious rituals by her grandfather, a prominent Mormon elder. I liked Beck as a columnist and agony aunt (Oprah magazine), but I found her memoir a difficult read, partly because the tone seemed to me hysterical and the nature of the alleged abuse implausible, which may be unfair. The contrast in tone between Beck and Westover, and changes in publishing practice since Beck’s memoir was published which ensured comprehensive fact-checking of Westover’s memoir, seem to me to lend credibility to Westover’s account.

Myself, I am not a Mormon.