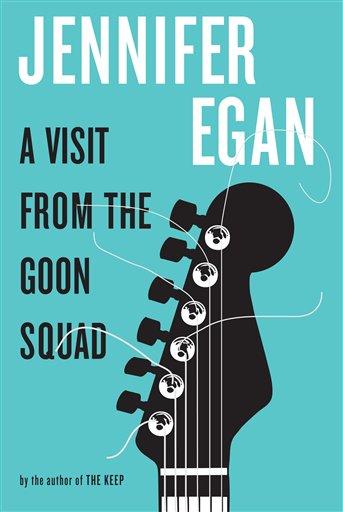 To be clear: this is not a book about music. This is a novel about time and technology, and change. The music business, being a fast-changing, youth-obsessed industry, just happens to provide a perfect environment for themes of change, aging, redundancy, mortality.

I would know. I spent 10 years in the rock music industry. Now I’m 35 years older. I feel it. So, I think, do my contemporaries.

Jennifer Egan says she didn’t know a lot about the music business but researched in order to write this story – or these stories, more correctly, as A Visit to the Goon Squad comprises thirteen interlocked, interrelated short stories rather than the novel’s traditional linear chapter narrative.

The stories loosely pivot around Bennie Salazar, first met as a teenage bass player in a garage punk band in San Francisco in 1979, and his long-time assistant, Sasha, who we see at her youngest as a small child from the perspective of her uncle, and at her oldest as a mother in her late 40s. Variously, we meet Bennie’s mentor Lou, a big-name, hedonistic record producer in the ‘60s and ‘70s; Bennie’s wife, Stephanie, a sometime publicist; Bennie’s protégé Alex, a one-night-stand of Sasha’s; Bennie’s close friends from his punk days, Scotty, Jocelyn, and Rhea; Sasha’s uncle and her college friend, Rob; Lou’s lover Mindy; Stephanie’s ex-boss Dolly, in her heyday known as LaDoll; Dolly’s daughter Lulu; the ex-rock star Bosco; the flailing ex-ingénue ex-movie star Kitty Jackson; Jules, Stephanie’s brother, who attempts to rape Kitty; and sundry other friends, family, lovers and clients.

The tone veers radically from satire to sour. The forms vary from Proustian to PowerPoint presentation (really).

Quite early, we meet Bosco, once a skinny, hyperkinetic stage performer guitarist, now an obese wreck. Bosco wants to go out on tour on stage one last time, doing what he once did, but blatantly as he is now: he knows it will kill him.

He tells Stephanie and Jules

“The album’s called A to B, right?” Bosco said. “And that’s the question I want to hit straight on: how did I go from being a rock star to being a fat fuck no one cares about? Let’s not pretend it didn’t happen. […] Time’s a goon, right? Isn’t that the expression?”

Later, Bennie echoes Bosco, telling his ex-bandmate Scotty, who has spent the better part of 50 years a bum

”Time’s a goon, right? You gonna let that goon push you around?”

The novel could quite easily be titled A to B, like Bosco’s album: What happened? What took us from A (then) and turned us into B (now)?

Never having heard the expression “Time’s a goon”, I like to think Jennifer Egan lifted the image from Elvis Costello’s song Goon Squad, off his album Armed Forces, which came out in 1979, the same year the fictional Bennie Salazar connected with the fictional Lou Kline:

I danced to that song at my 18th birthday party.

The way I heard it then, and the way I hear it now, Elvis Costello’s song is about paths our lives could take, and our fear that we can’t control how it’ll turn out, and our fear the way it turns out might be completely random, or conversely, that it absolutely might not be: that some of us are born to lose and some are born to survive.

These are themes I read in Jennifer Egan’s book. Among other things, it’s exploring failure and thwarted potential, and unexpected, unlooked for success; the tragedies of getting what you want, or not getting it. It’s shockingly predictive of the #MeToo movement, and predictive, too, of technological change and its effects on human relations (A Visit to the Good Squad was published in 2010).

There were characters I feared for. Please, let them live. Let them live well.

Some pray to survive.

Sometimes I read the ‘B‘ where Egan took individual characters, and sighed in relief. Sometimes I felt sad for where she left them. But if Egan’s book says anything, it says the story ain’t over, until life ends. There’s a recurring motif of sunrises and sunsets. Life ends for only a couple of these characters within the pages of these stories. 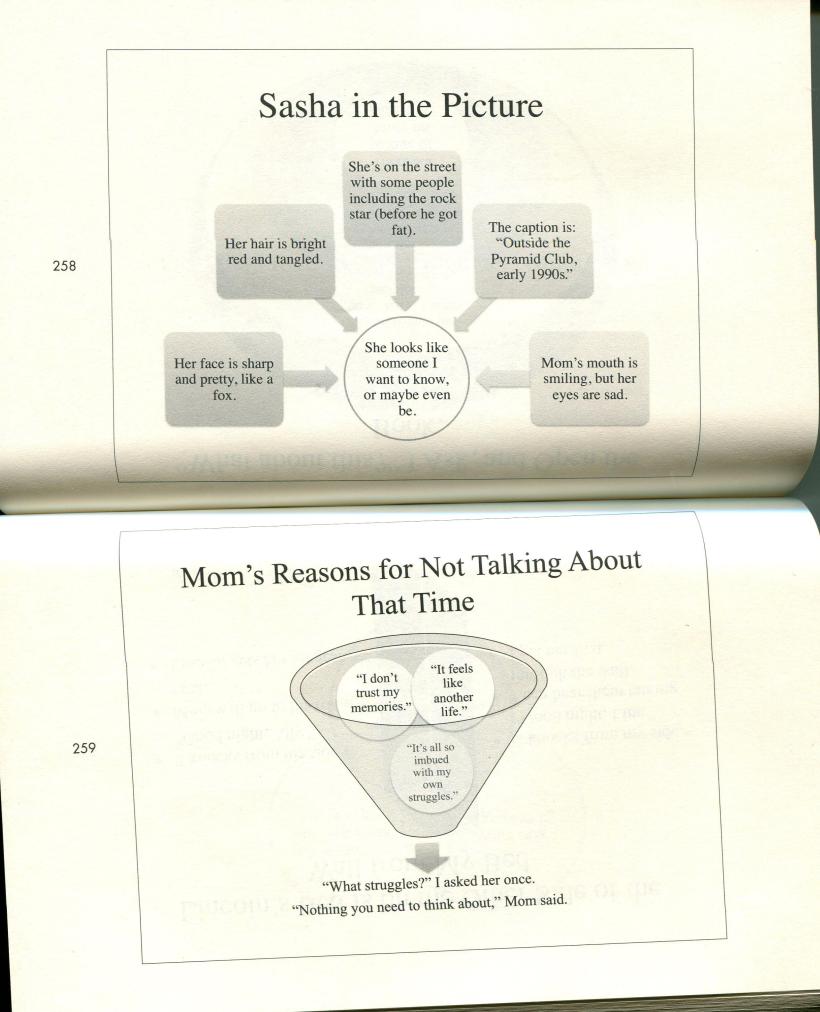 Of the arcs I found chilling, Jocelyn’s story stands out. We meet Jocelyn as a beautiful Eurasian 17 year-old Californian punk. In 1979 she has the fortune, or misfortune, to be picked up as a hitchhiker by Lou Kline the hot-shot record producer, in his red Mercedes.

Jocelyn’s friend Rhea (“the girl no one is waiting for. Usually the girl is fat […]”) tells us

“I’m two inches away on my parents’ flowered bedspread while she dials the phone with a black fingernail. I hear a man’s voice answer, and it shocks me that he’s real. Jocelyn didn’t make him up […] He doesn’t go, Hey beautiful, though. He goes, I told you to let me call you.”

“A man is sitting in a round corner booth, smiling teeth at us, and that man is Lou. He looks as old as my dad, meaning forty-three. He has shaggy blond hair, and his face is handsome, I guess, in that way dads can sometimes be.

C’mere, beautiful, Lou actually does say, and he lifts an arm to Jocelyn.”

Before long Lou is forcing Jocelyn’s head up and down on his erect penis as they sit in a public booth in a nightclub. But that’s okay. Already “Lou did some lines off Jocelyn’s bare butt and they went all the way twice, not including when she went down on him”.

It is not always okay. Not once Jocelyn forms a bond with Lou’s eldest, best-loved son, Rolfe.

I’ve met a few Lou’s. Happily, I’ve never had the experiences Jocelyn has. Jocelyn is a fiction, but she reminds me sharply of the actor and activist Rose McGowan writing about her early experiences in L.A., in her autobiography Brave.

I go, do you even remember being our age?

Lou grins at me in my chair, but it’s a copy of the grin he had at dinner. I am your age, he goes.

Ahem, I go. You have six kids.

So I do, he goes. He turns his back, waiting for me to disappear. I think, I didn’t have sex with this man. I don’t even know him. Then he says, I’ll never get old.

You’re already old, I tell him.

He swivels around and peers at me huddled in my chair. You’re scary, he goes. You know that?

A bit over 20 years later, Rhea and Jocelyn visit Lou at his deathbed, poolside at his mansion, as ever:

Jocelyn, who has lost at least 15 years of her life as a drug addict, and has lost the capacity to love, thinks

“Who is this old man dying in front of me? I want the other one, the selfish, devouring man, the one who turned me around between his legs out here in the wide open, pushing the back of my head with his free hand while he laughed into the phone. […] I have a thing or two to say to that one.”

In the last story, the last episode, Bennie tries to make it up to Scotty, the friend of his youth, for Bennie’s former success and Scotty’s years of failure.

Bennie organises a massive outdoor gig at Ground Zero, where Manhattan’s Twin Towers once stood. The gig has been promoted virally through social media. It’s anybody’s guess how many might show up.

In the event (as they say), the ground is packed. Scotty panics severely:

Yet, once forced on-stage, Scotty, who has been under the wire, so to speak, technologically, Scotty, who plays “ballads of paranoia and disconnection ripped from the chest of a man you just knew had never had a page or a profile or a handle or a handset [smartphone], who was no part of anyone’s data, a guy who lived in the cracks all these years, forgotten and full of rage”, is recognised as a signifier of The Authentic, “that now register[s] as pure”.

Scotty has the impact of a musical messiah, a Bob Dylan for the 2020s.

Scotty, who commences his set with songs for children, this future decade’s key trend, a Wiggles for “pointers” (infants) and adults alike, moves onto his punk repertoire from 1979: Eyes in my Head, X’s and O’s, Who’s Watching Hardest, and Jocelyn’s song, What the Fuck?:

Jennifer Egan’s characters each ask: Now look at where the fuck we are.

We were there. Now we are here.