At end May, in reaction to controversy, Electronica DJ and author Moby cancelled all remaining dates of his book promotion tour and announced he was “going to go away for a while”.

There’s so much in Then It Fell Apart that is interesting and well written that it’s sad to dismiss the whole book due to its failings.

It does have manifest failings. I’ll outline them, but again, it feels sad to write off the whole project, and sad to lash an author who makes so naked his frailties.

In the Preface, Moby writes that after finishing his first memoir, Porcelain, “rather than go back to therapy, I kept writing”. That’s where the problems start. Much of Then It Fell Apart reads like therapeutic writing, best discussed between client and therapist, or as a starting point for meaningful private conversation between Moby and significant individuals in his life.

I don’t think Moby was well served by editors or publishers with this book. He’s keen to set out the full extent of his drug-fuelled behaviours and emotional issues. He recognises his desperate drive for validation, for affirmation. As readers, we did not need to know everything he chose to tell. Editors were needed to set boundaries. Publishers needed to put in place fact checks.

The most obvious area is how he writes about women. The controversy that resulted in Moby retreating arose from how he wrote about film actress Natalie Portman, introduced on p.30.

He wobbles on the tightrope for a few paragraphs before things fall apart.

‘She smiled again and looked straight into my eyes. “I’ll be in New York too. Can we meet up?” ‘

Moby remembers Natalie as “flirting”. Subsequently he remembers them as “dating”, albeit briefly. He writes sentences that can be read ambiguously, that read as disingenuous:

‘[…] he stared at me blankly and asked, “Are you with Natalie Portman”

‘I’d had an amazing night with Natalie in Cambridge […]’

‘At midnight she brought me to her dorm room and we lay down next to each other on her small bed. After she fell asleep I carefully extracted myself from her arms and took a taxi back to my hotel.’

He remembers himself as 33 and Natalie Portman as 20.

For starters, she’s clear she had just turned 18. She told Harpers Bazaar UK

“I was surprised to hear that he characterized the very short time that I knew him as dating because my recollection is a much older man being creepy with me when I just had graduated high school”.

Fact checks conducted by the Washington Post confirm that across the few weeks Moby refers to, Moby was touring in support of his hit album Play and Portman was making a film. The two met up in New York a few weeks after the initial backstage meeting, not a few days. They both attended the MTV Video Music Awards.

As Portman recalls, it was not her suggestion that they “meet up”:

“I was a fan and went to one of his shows when I had just graduated. When we met after the show, he said, ‘let’s be friends’. He was on tour and I was working, shooting a film, so we only hung out a handful of times before I realised that this was an older man who was interested in me in a way that felt inappropriate.”

You only have to see the photo Moby posted in rebuttal, showing the two of them backstage, him with his shirt off, her with a small, uncomfortable smile, to know the truth of this. It’s a fan pic: Moby, with his jaw-wide, rectangular grin, is the fan; Portman, so young, is the star.

I recognise these photos. I have several where I look just like Moby does here: an ecstasy of adulation; an instinctive professional pose in response. 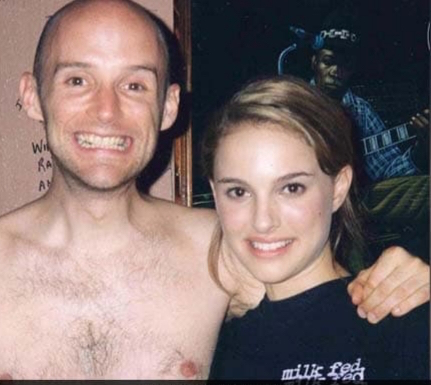 This is part of the sadness of this book. Moby is a fan to the core, and some of the best chapters in Then It Fell Apart are accounts of growing up into fandom. The chapters that tell of teenage trips to New York nightclubs, the teen teaching himself DJ skills, even the chapters about his early exposures to music and the genesis of his record collection – all are wonderful.

As are accounts of having dinner with David Bowie and Iman, Lou Reed and Laurie Anderson, and singing on-stage with New Order, channelling Ian Curtis.

Moby as fan is endearing. Moby as creepy older guy is not.

But he keeps doing it. He keeps introducing us to beautiful young girls, some famous (Christina Ricci, Lana Del Rey), some not, salivating on paper as he writes of their exquisiteness, implying he slept with them.

In his Preface, Moby writes “I’ve changed some names and details out of respect for other people, but all the stories in this book actually happened.”

That anecdote goes on. And on. Did we need to read it?

‘She looked at the sheets. “Oh, sometimes when I have sex I get these burst cysts in my vagina. Or I got my period,” she said with disconcerting calm.

There was more blood than I’d ever seen in one place. It looked like a cow had just given birth. There was blood on the sheets. On Pam. On me.’

There are other tales of menstrual mess on couches, on sheets, of explosive diarrhoea, of the aptly-named Andy Dick, a comedian, attempting to shit on Moby’s birthday cake, pissing into Moby’s champagne.

There’s a tale of “knob-swiping”, a game whereby a man is dared to wipe his naked dick against another person in public, without that person’s awareness. Moby knob-swipes Donald Trump. First time I’ve been on The Donald’s side. More particularly, Moby writes with courteous restraint of Donald Trump’s daughter Ivanka, who is kind to him, then launches into telling about dick-wiping her dad. I bet Ivanka does not feel respected.

We get it. Moby was unable to sustain any kind of couple relationship with any woman. He panicked. He could only have promiscuous sex, sex with strangers, sex with what he calls “degenerates”, occasional sex (or implied sex) with women he idealises, sex that goes nowhere … except for that ex-girlfriend, the on-off girlfriend who lasted several years, who he calls Kellie. Kellie must hate this book.

Condense the narrative about the boy growing up to two chapters: early childhood; then high school years and the brief attempt at college.

Condense the account of stardom and self-destruction. Keep the star-as-fan accounts of his brushes with fame, appropriately framed (fact-checked). Keep representative accounts of self-destructive behaviours and alienation.

The Lana Del Rey (Lizzy Grant) episode is good. If Lana/Lizzy is good with it.

I would much rather have read less about the hell of being an addict celebrity and had Then It Fell Apart be a three-strand volume: the childhood; the story of a crash; then the story of how Moby constructed an equilibrium, even if precarious.

I don’t need a happy ending. But I need more balance. As a reader, I know there is more to this story, because I made it to the final page. I imagine it was Moby’s intent to write a third volume, the volume of his recovery.

After the controversy prompted by how he wrote about Portman, and after his pledge to “go away for a while”, that book might never be written, or, if written, might never be published. Which is truly sad. 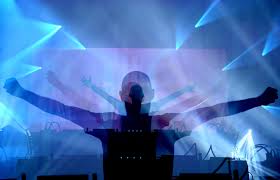 As a reader, I’m left with the overwhelming impression of unmanaged anxiety, a man self-medicating with toxic substances, self-loathing, an eating disorder mentality (I don’t doubt Moby is sincere in his veganism on principle, but it does seem to me he’s a case-book male eating disorder), revulsion at bodily functions, and madonna/whore flip-flopping between idealisation of women and fury at women – ironic, given the feud that resulted when Moby accused rapper Eminem of misogynistic lyrics.

But then, he does say he had thought he and Eminem had much at core in common:

“Apart from misogyny and homophobia, I felt a strange kinship with Eminem. We’d both grown up in grinding suburban poverty. We both had complicated single moms. We’d both found refuge in music […] All along I’d assumed Eminem hadn’t really been that upset with me and that someday we’d meet up and have a friendly conversation […] We’d talk about growing up poor and scared, and maybe even become friends”. 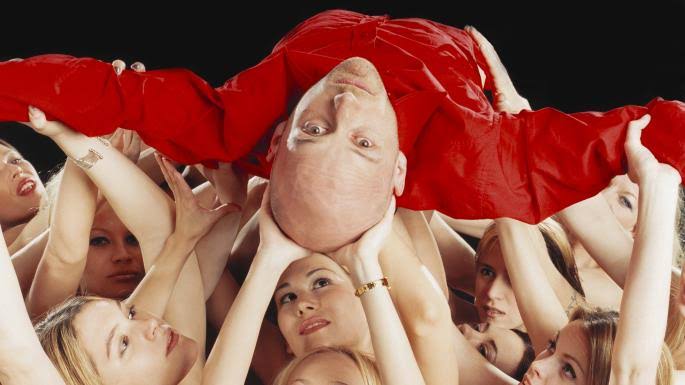 While I don’t doubt at all that Moby grew up scared and poor, especially in the very early years, neglected in a chaotic environment, acutely feeling the disparity between his circumstances and the prevailing norms in the prosperous Connecticut county that was home, he never discusses the elephant in the room: his mother lived in Connecticut because that’s where she grew up, and her affluent parents were just up the road in their 10-bedroom mansion, where she and Moby apparently lived for long stretches.

Moby writes of his grandfather with respect and love, writes less of his grandmother – but what was the deal? Why was the child experiencing grinding poverty while living under his grandparents’ roof and later, in a modest house purchased for his mother and him by his grandmother, with his mother earning as a secretary?

When he writes of their temporary relocation to a somewhat less prosperous Connecticut county, he makes the point that he moved from an all-WASP school to a school community that was 90% Black and Hispanic. But then he goes and adds that none of his Black and Hispanic classmates were as poor as he was. Which is just embarrassing. It pushes the self-pity meter way, way up. Words like “entitlement” spring to mind… 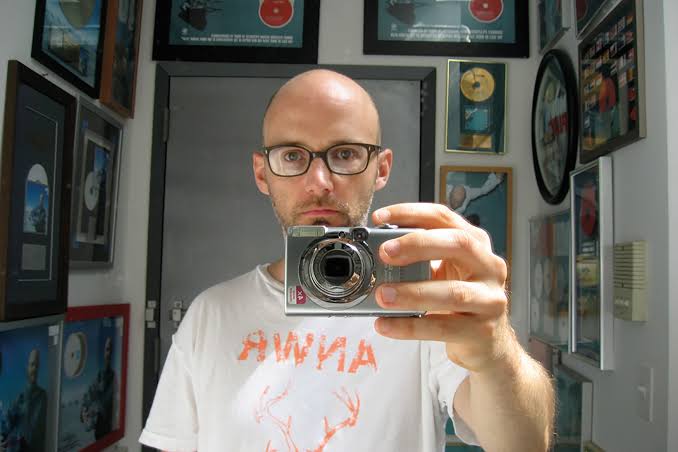 So was Moby the little white prince, displaced? Is his rage and his desperate, driving need for validation a consequence of “I *should* have been pampered in the castle!”?

He does write at length about his envy of the billionaire set, despite seeing clearly at close quarters how wretched the billionaires are. And he writes of purchasing a castle, the top five floors of an iconic Gilded Era New York building with views all across Manhattan and the Hudson, and of how living in the castle failed to salvage his soul.

If we take the end page at face value, what salvaged his soul, finally, was AA.