Jane Harris is a British author and screenwriter who is the same age as I am and if I were the envious kind I suppose I should hate her. Her writing is brilliant.

Her first novel, The Observations (2006) was a finalist in Britain’s Orange Prize for Fiction 2007. Her second novel, Gillespie and I (2011), is similarly set in Glasgow, where Belfast-born Harris grew up and attended university.

Harris takes obvious delight in setting herself the task of researching a time and place so thoroughly that she feels able to inhabit the first-person voices of people whose fictional lives are, on the face of it, far removed from her own lived experience: a 15 year old ladies’ maid in 1863, a deranged English spinster in 1888 and 1933, a pubescent male black slave on Grenada and Martinique in 1765.

Wait up, you say (or at least, the reviewer in The Guardian says). A pubescent male black slave in 1765? But how can a white female British author presume to take the voice of a black male slave?

First, Gillespie and I, a fictional narrative in the form of a memoir: purportedly written by one Harriet Brown, at the age of 80, in 1933, about events that occurred when she was in her 30s – well and truly on the shelf, in the marriage market of her times. Harriet starts out asserting she is writing a biography of the (fictional) Scottish artist Ned Gillespie, but it’s evident almost at once she is writing about herself, in the most self-serving terms.

I doubt too many are clamoring to protect the authentic voice of privileged middleaged white female spinster stalkers, let alone white female stalkers who deploy the memoir form to write about the victims of their stalking. Those who have read blogs in the ‘Memoir’ category of this blogsite might be aware I am myself a middleaged, verging on elderly, white female spinster with a history as a stalker, who does write memoir pieces claiming relationships with people she has stalked.

Given the parallels between what Harriet Brown is doing and what I’ve done in blogs, Gillespie and I made for uncomfortable reading for me. But it sets out to be uncomfortable – if also, often, hilarious – reading. When I discussed it last night with friends I expressed the sanctimonious opinion it makes all of us – not merely the SWF stalkers – question where in our lives we promote delusional stories about who we are and how others perceive us.

Gillespie and I is long, 501 pages. The first half is relatively restrained and sometimes feels unduly detailed and protracted (which makes sense, once you realise it’s the case for the defence). The first-person narrative voice is highly stylized, alternately prim and vitriolic, and initially I found it off-putting. In the very early stages, only a mischievous sentence in the Preface persuaded me to sign on for the duration:

“I never suspected that we were moving towards such a rapid unraveling, not only of our relationship (what with that silly white slavery business and the trial) but also of his [the artist Gillespie’s] entire fate.”

The unravelling, which commences at the halfway point, is rapid indeed. The second half of the book is faultless, a wild savage scamper to a vicious end.

Harris seeds her text with other teasers to make us persist in the early parts of the tale, and by about page 135 I was hooked by the malevolent humour and originality. And the cleverness. Such a very clever text!

I read a review that described Gillespie and I as a “masterpiece of misdirection”. That phrase prompted me to seek out this title, but I suspect that critic misunderstands the term “misdirection”. It has a legal sense, not pertinent to this novel (although it becomes a courtroom drama); it also has a meaning specific to magic tricks. Misdirection, as neatly summarized on Wiki, is “a form of deception in which the attention of the audience is focused on one thing in order to distract its attention from another” – a technique to facilitate sleight of hand.

Gillespie and I does not do that. What Gillespie and I does is create what I’ll call a double narrative, a shadow narrative that reads counter to the narrator’s intentions. Quickly we recognize that this narrator is not merely unreliable: she is so far divorced from ‘truth’ that she’s lost its address. She is either completely self-serving, without conscience, or she is delusional. She’s attempting to reclaim a narrative she’s long since lost control over: she writes untruths that the truth glares through.

My friends asked whether Gillespie and I has a point, as in a moral. I suppose I could take as its moral something like “Be careful how you speak (or write) about other people; what you say about others speaks more loudly of who you are’. But I don’t believe Jane Harris set out to write a fable. Instead, I read Gillespie and I as a strikingly wicked gothic fairytale about the havoc evil forces can wreak on the unsuspecting. Harriet Brown, with her hooked nose, her tall hats, her garb of grey and purple and black, is a witch, a nightmare witch.

She calls to mind the Scottish bedtime prayer; “From ghoulies and ghosties and long-leggity beasties and things that go bump in the night, good Lord deliver us.” 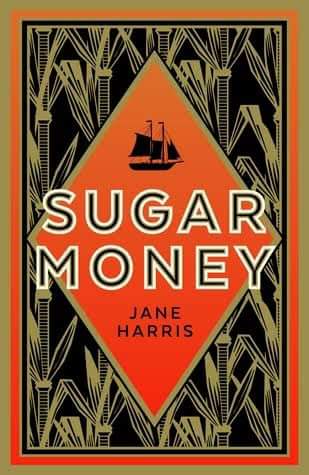 Like Gillespie and I, Sugar Money is told by a first person narrator, in an act of ventriloquism requiring huge amounts of research. As with Gillespie and I, the first person voice is highly stylized, in this case employing dialect: Creole phrases and sentences, a mélange of French, English and African linguistic elements.

Again, I found the first person voice initially so offputting I almost gave up. I’m glad I didn’t.

The Guardian’s reviewer disliked this book absolutely: she objected to a white writer speaking as a black slave; she argued the stories of black slavery are not the white writer’s to tell; she believed the use of the classic adventure genre (think Treasure Island) was inappropriate to such a serious subject; she felt the way the tale unfolded was initially way too soft in its depiction of the conditions of slavery, and that by the time Harris laid it out in explicit ugliness it was too little, too late; she proposed that black writers have addressed the issues raised in Sugar Money more powerfully, more authentically, such that the white writer added nothing of value.

Also, specifically, that reviewer felt the romance is “underdone” (is it proper to write about slavery with reference to the romance genre?); and that issues are touched on in mere sentences where Toni Morrison would take pages, whole books.

As a SWF – a SWSF, Single White Spinster Female, a SSWFS (Spinster Single White Female Stalker, no less – I can’t argue with those perspectives. Except I will, to say (1) Jane Harris did not set out to write books already written by Toni Morrison – if she alludes to abuses such as black slave couples being forcibly split up without making it her novel’s central issue, it’s because it is not her novel’s central issue; and (2) there will be those of us who, having read Toni Morrison, and others, still find value in Sugar Money, who will learn much we did not know previously, and are stimulated by the particulars of this time and place – the Caribbean, late C18th – to learn more.

I found Sugar Money affecting and educative. It was also entertaining, though perhaps it is not appropriate for a novel about black slavery to entertain?

I’m out of step with the current orthodoxies here. If a novel is properly researched and sensitively written, I don’t myself have a problem with the author’s demographic or ethnicity. But that’s easy for me to say: I’m speaking from a culturally dominant position.

From that culturally dominant position, my own perspective is: What is the novel, if not the creative exercise of empathy? From that perspective, the questions for me become: did the author succeed in engaging me, entertaining me, moving me, enlightening me, encouraging me to find out more? For me, the answer here is YES.

On the other hand: is the choice to use the first person voice of a fictional character so radically different (in race, gender, historical location) from the author primarily a showy literary move, a bravura performance?

It seems to me to come down to: Is a tale about black slaves in the Caribbean off limits altogether for a white author? If not, can it be told another way, without foregrounding the colonial experience, without making white characters central?

Attempting to write from ‘within’ any historical experience is fraught, even with the most thorough research. Historical subjectivity is immeasurably different from contemporary worldviews.

The cultural appropriation debate will continue. For me, I’m grateful writers with the immense talents of Jane Harris are attempting to re-present historical mores. Even if she is a WF.

Jane Harris – portrait of the artist as a White Female?

Worked in the Australian rock music industry as a journalist and published widely as a poet before moving to London and spending the better part of a decade in advertising agencies. Returned to Australia and tried teaching, primarily teaching English to non-English speaking, newly-arrived refugees but also briefly as a high school classroom teacher. Has travelled Western Europe, North Africa, Russia, Northern India, East Asia, coastal USA, some Pacific Islands, and Australia.